A Vegetarian and Vegan Food Blog 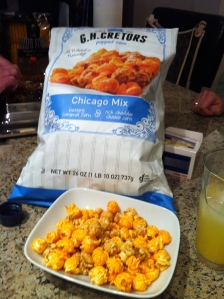 When I arrived in Chicago and asked my friends, what Chicago’s specialties were, they all suggested that I try Chicago popcorn. It’s a mix of cheese popcorn with caramel corn, sweet and savoury. One evening I went to a friends and brought up that I wanted to try Chicago popcorn and he just happened to have bought a bag from Costco that day.

What luck. We opened a bag and I could not stop eating them. We realized that the caramel corn is heavier and tends to fall near the bottom of the bag and the cheese floats at the top. For future reference, I’ll give the bag a good shake before pouring the popcorn into a bowl.

The brand G.H. Creates, that is sold at Costco uses non-GMO corn and only natural ingredients without gluten ingredients. I was happy to find it at my Costco at home. I actually ate a bowl while writing this post. It is quite reasonably priced at about $7 for a 737 gram bag.

If you are in Chicago and want to try the best Chicago popcorn, go to Garret Popcorn shop around the city. They make their popcorn fresh and also use non-GMO corn, no preservatives and are gluten free. They have many flavours with nuts and now ship to Canada.

Uncommon Restaurant in Chicago won the Greenest Restaurant in America award earlier this year. They have herbs planters that line their patio and the nation’s first certified organic rooftop garden. The fruits of their labour end up in the menu. My friend’s sweet toffee latte was topped with whipped cream and he craved seconds after finishing this big bowl.

French toast with grape syrup using local grapes and topped with toasted pecans and icing sugar. The tender grapes were peeled and had the softness of a pear. The combination was delectable. 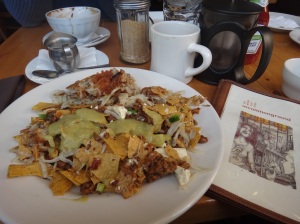 Vegan chilaquiles with scrambled tofu, homemade vegan seitan chorizo, topped with cheese, tortillas, guacamole and a side of hashbrowns. The staff was still asleep when we arrived at 9am and my order took three attempts to get it right. It gave me time to savour my french pressed coffee. The seitan was my favourite part of this dish, and the focal point of flavour. I added hot sauce to the dish which was a mistake and turned my mouth on fire and altered my taste buds.

I went out for pancakes to my friend’s favourite place by her house in Oak Park, Illinois. Delia’s Kitchen is a family owned restaurant and the owner Veronica was very friendly and came over to our table to say hi. Veronica owns another restaurant in Chicago and is currently working on a third concept that will focus on healing foods.

I was so excited to see buckwheat pancakes on the menu and ordered them with a side of strawberries.  The pancakes came in a stack of three and were lightly dusted with icing sugar, topped with thinly cut strawberries and served with a side of syrup. They were light and fluffy and taste delicious. I was happy to find this healthy option on their menu and made a mental note to  learn how to make them.

Chicago has many deep dish pizza restaurants and my friends took me to these two. My first night in Chicago, I tried Lou Malnati’s pizza and ordered the “Lou” which has spinach, mushrooms, roma tomatoes and three cheeses. This was their only vegetarian option and did not allow any substitutions.

The pizza took about two hours to arrive and by then I was starving. Lou’s pizza is much shallower than other deep dish styles according to my friends. The pizza was not as heavy as I had expected and the crust was thin and buttery. I ate one and a half pieces and was really stuffed.

Connie’s Pizza is notorious in Chicago and the official pizza for many of their sport’s teams. Their restaurant on Archer Avenue seats 100 or so people and was easy to get a seat on a saturday night. Their pizza comes in the option of thin crust, artisan, deep dish and stuffed. Plus their menu has a lot of other Italian options to choose from.

I created my own pizza and ordered a personal pizza with goat’s cheese, artichokes and green olives. After we ordered, the waiter brought a basket of buns with a sweet whipped butter. I ate a piece and saved my appetite for my pizza.

When the pizza arrived, I could not wait for it to cool before I dug in. I cut up a piece of the pizza with a knife and brought a piece to my mouth. The cheese was stringy and the pizza delicious. The flavours were perfect as it is my favourite pizza combination. The crust was crispy but did not have as much flavour as Lou’s.

I felt that Lou’s had a better crust but I liked the flexibility in Connie’s menu and being able to create a personal pizza. They are both great and I would eat at both places again. 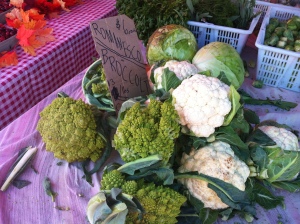 l found this usual Italian vegetable at the Vancouver farmers market called Romanesco broccoli. It looks like an alien vegetable with pyramid shaped tips and tastes like a cross between broccoli and cauliflower. It feels like something straight out of Star Trek. This vegetable had so much character that I named it Gino.

I cut it into florets, steamed it and sautéed it with butter. It held it’s shape and really tasted like an exact cross between the two vegetables. It was really tasty and kind of freaked my kids out. 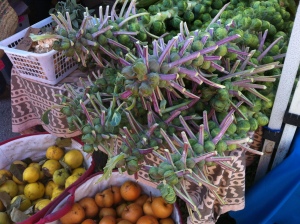 This stalk of brussel sprouts was so beautiful with the purple stalks that I could not leave it behind. The brussel sprouts at the top were small babies and got bigger near the bottom of the stalk. The taste of them was much milder than usual brussel sprouts, probably because they are so fresh.

My first trip to Oktoberfest was everything that I had imaged and more. As we walked up to our tent, a stretcher was rolling away a person who had over done it. According to my German friend, that was very common. I was so surprised to see carnival rides behind the tent as I could not image going on one in a drunken state. It seemed like a recipe for disaster. My friend commented that people throw up often and there is a joke about being careful while walking under the rides.

The tone in the tent was very merry as people start drinking early in the day and continue until the evening. Most people were dressed up and cheering or singing loudly. We got to our table and of course ordered beer. It was really loud and a band was playing American covers and traditional German music. It was a party like no other.

One litre pints of beer. They were really heavy and encourage quick consumption. Who likes warm beer?

This is only half the original size of the pretzel. We couldn’t even finish it between five people. My Portuguese friend carried it around in his pocket for the rest of the evening.

I had to break my rule of no eggs, which can happen when I travel. This was the only thing on the menu that was vegetarian friendly. This German pancake just happened to be a dessert option and came with a side of stewed fruit. It was very delicious and seemed like the pancake was cut up during the cooking process to keep the inside fluffy while making the outside crisp and buttery. It was quite heavy and filling so I shared it with my friends.

Oktoberfest is an experience like no other and I am really happy that I had a chance to experience it. If I am in Europe at that time of the year again,  I will definitively make it a plan to go back. 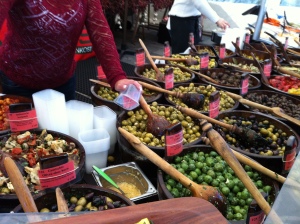 On my first day in Munich, Germany, I went straight to the famous Viktualienmarkt. It is like a farmers market but even better. They have the most amazing food to eat there and many cafes are in the market. I tried a few things and started with my favourite, olives. These olives were marinated with everything that you could imagine, herbs, cheese, citrus, garlic and much more. I got the most popular flavour which was herbs and spices and also tried the citrus and cheese olives.

I bought a few items from this adjoining deli as well. I tried feta that was wrapped with thinly roasted eggplant, dried apricot that was stuffed with cream cheese and figs stuffed with cheese. I also got a cold lima bean salad that was in a tangy tomato sauce.

There are tonnes of stalls selling the most beautiful exotic fruit and vegetables that were all mini in size. I did not buy anything but was amazed at the selection.

These were also popular at the market. It seems the Germans are always ready for Christmas and these ornaments were on sale at the market in September.

You are currently browsing entries tagged with food at Coriander Kitchen.

Coriander Kitchen
Create a free website or blog at WordPress.com.